Let me tell you a story, it’s about demons and how they came to be. From the moment there was sin there were demons. Some are born never knowing the light of day, already damned into darkness, but others had to earn their damnation. These were demons that were born human, and while some changed because of infected blood, there are a few who became demonic after becoming truly evil. Whether it was from selling their souls or just losing them, these people were void of humanity and evolved into something vile and sinister. And it was these depraved creatures that were the origins to demons; breeding new races throughout hundreds of generations.
Within time these beasts began to crave blood and flesh until it became a part of their DNA. Outcast by all gods, the demons grew to fear holy emblems; the ankh especially, since it was one of the oldest and most recognized symbols amongst these ancient creatures.
The blood of demons was a disease to humans; it was tainted with evilness, and would infect those who came into contact with it, bringing out the wickedness in their own souls. Some people turned fouler and faster than others, but a few could manage to preserve some semblance of humanity, but either way to survive once becoming infected, the subject would have to continuously consume blood to keep their own stabilized. These half breed demons are vil sangs. They mostly walk in human form, but when enticed, their demonic features such as glowing eyes and fangs would emerge. Over time they could grow more demonic both in looks and in strength.
Vil sangs are on the bottom of the demonic pyramid; the weakest of their kind, they are usually looked down upon by full blooded demons. Vil sangs are commonly made by other vil sangs, since demons despised them, but a few are made by true demons; whether it is out of boredom or for a different form of torture.
The vil sang disease is one that cannot be cured; the demonic blood is too powerful and quickly works its way through the human body. There is no vaccination to prevent it, anyone who had blood to blood contact would surely become a vil sang.
With the birth of demons came warriors who would fight them, mortal men who trained and earned their strength. They would hunt and kill demons to cleanse humanity. Some of these warriors hunted in clans while others hunted alone, but all of which would devote their lives to the mission, giving up anything that would ensure their success. It usually led to a hard life, but none as cruel as that of a girl who was born and then thrown into an instant and constant struggle for survival.
Sarain knew nothing else.

She could feel his eyes intensely on her; he had been watching her all night, waiting to get her alone. But that time wasn’t yet to come, she wanted to dance, and knew the perfect place they could go.
She brought him to what appeared to be just an ordinary warehouse downtown. The outside had a large red X spray painted on the brick; it looked like simple graffiti. The man looked up at the building with a strange look, he thought that perhaps she was lost, but she insured him that this was the intended destination.
At the door they were greeted by a large stern man who gave the woman an once-over look before letting them both in. The man got the impression that the bouncer recognized the woman as a regular.
Inside was dark and only lit by surging colorful spotlights that flashed around the large room. Many people danced inside to an endless pulsating beat that blasted from speakers placed above in the rafters. Most people were dressed dark and looked very pale, but it was hard for the man to be sure in the poorly lit room.
The woman led him into the crowd like she fit right in even though she stood out in her bright red dress. She took him by the hand and he followed her out. Lights flashed as the woman moved seductively against the man. The music was fast but the woman danced slow, lingering close to him in a longing manner.
She leaned in towards him as if she were going to kiss him, but then pulled back at the last second just to tease him. He smiled at her, and when she did it again, he quickly moved in to get the kiss, but she was surprisingly too fast for him. Instead, he got a deep sniff of her hair and he thought of how good she smelt.
And as if reading his mind, she said, “I taste even better.” She then leaned in and whispered into his ear, “Let’s go somewhere more private.”
She took him by the hand once more and led him to another door other than the exit.
“Where are we going?” he asked.
“You’ll see soon enough,” she said to him with a smile.
Behind the door was a staircase leading down into a dark corridor. The man found it odd, but didn’t really care if it meant he could be alone with her. The stairs went a ways down, so much that the man could no longer hear the music from the club above. When they reached the bottom the woman pressed the man against a wall. She started to move in closer to him, her skin brushed up against his, she felt warm against his cool skin.
He looked at her lustfully and asked, “Are you ready to let me have that taste?”
She smiled and then suddenly yelled out, “Now!” And seemingly out of nowhere, two large men came out of the darkness.
The man quickly made motion to move, but the woman knocked him back against the wall with incredible force. The man’s eyes then lit up and his fangs and true self came out. He looked over at the two men and noticed that their faces were deformed like gargoyles and their skins were gray.
“What is this?” he shouted out, “She’s the one who’s human!”
They didn’t listen and grabbed the vil sang man instead. He struggled as they dragged him deeper into the underground corridor, where he saw a large metal contraption standing in the middle of the room.
The woman walked over to it and flipped a switch causing the metal pieces to start moving, and the vil sang soon realized what it was; it was a giant meat grinder.
The vil sang continued to holler as the bigger beasts brought him closer to the grinder. Then he gave the woman one last look and muttered out, “You bitch,” before the beasts threw him in.
She watched as the metal sliced through his flesh until his screaming stopped. She never closed, nor looked away with her violet eyes.

A knock at the door jarred Sarain out of sleep. It had already become night, but she still felt tired from her vigorous night before. Nevertheless, Sarain was glad to get up; she had been dreaming about him again; memories from her past that she didn't want to look back on. She quickly dressed with the knocks still coming from her door before finally she was ready to answer it.
A man stood on the other side, or at least he looked like a man; Sarain knew better though, this wasn’t a man, he was a vil sang, and she had grown able to tell the distinction in an instant. He looked panicked and desperate; he had to be to come to her door. Sarain knew that the man wouldn’t be able to step inside, he couldn’t cross the barrier she had hidden in the door frame, it was a barrier to keep out evil beings that she was now cleverly hiding in the frames and sills of her home; better to not alert people to her strange behavior and the barriers didn’t need to be constantly redone.
Sarain looked at the man and said, “You have a lot of nerve coming here, you know what I do to your kind.”
“I do, but I heard you also know the difference between creatures that are evil and ones that aren’t,” he replied distraughtly.
Sarain looked into the vil sang’s helpless eyes and could see that he meant her no harm. She could tell the difference, it was something she looked for now, before she would kill any vil sangs; whether or not they were actually evil and not just genetically so. Sarain had learned a lot in the three years since defeating Sephor.
“What do you want?” Sarain finally asked.
“I need your help, and I heard that you’re experienced in these kinds of situations,” he answered.
“I don’t really help your kind,” Sarain quickly stated.
“But it’s my children that need your help,” he frantically said, “They’re my children from when I was human, and they still are. A vil sang couple has them and plans to kill them.”
“Okay,” she responded and then asked, “Why can’t you get them on your own?”
“They aren’t regular vil sangs, they’re more… more…” he trailed off thinking of a word to describe them.
Sarain finally stopped him by saying, “Demonic?”
“Yes,” he replied, “And they are too strong for me to take on alone.”
This could have been a trap, but Sarain was still curious, she continued to talk to him and learned that the man’s name was James, and that both his son and daughter had been taken by this demonic vil sang couple. It was the same couple that had turned him only a few of years earlier. They were not pleased with his progression as a vil sang, and felt that his children were too strong of a tie to his humanity, and needed to be disposed of. James wasn’t willing to lose his children, and knew that if they were to be saved something would have to be done fast, that’s why he had come to Sarain. She had been in this particular town for nearly two years and had made quite a name for herself on the streets there. He had learned that if anyone could save his children it would be Sarain.
Sarain never could turn her back on children, if there really was a chance to save a child she had to take it. She accepted the task and got more information on the vil sang couple such as their whereabouts and interests. Their names were Cyrus and Desmina, and they had been together for more than three hundred years. Cyrus had a weakness for beautiful women and Desmina had a weakness for Cyrus, she was completely devoted to him.
Sarain accepted the mission; demonic vil sangs seemed to be popping up more frequently, and were getting to be easy to take care, especially now that she had a few tricks up her sleeve, and someone to back her up. 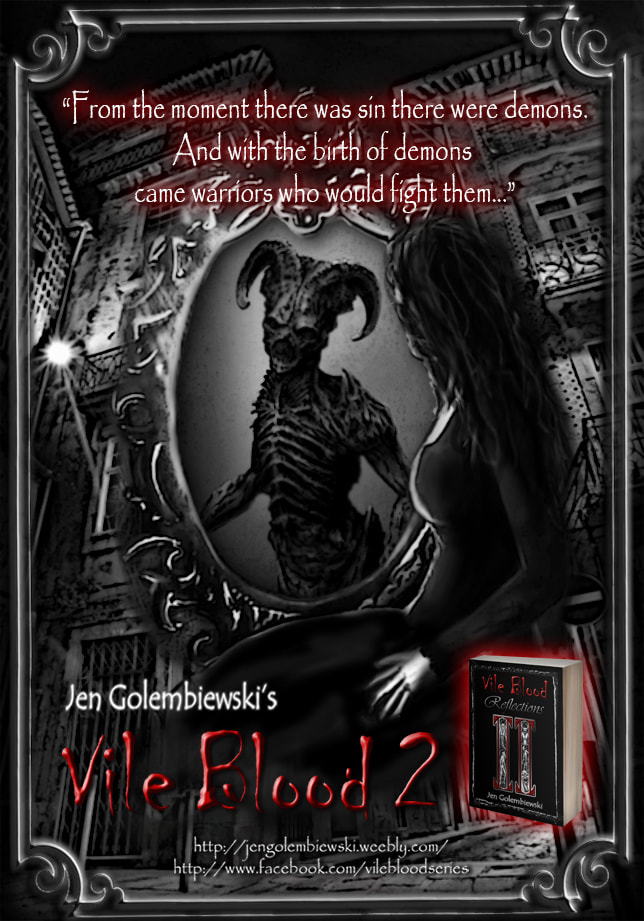 Buy the complete story at:
Amazon
Proudly powered by Weebly